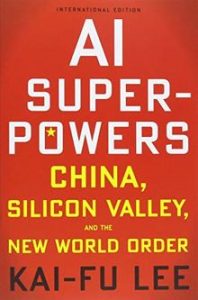 By Josef G. Boeck für The Human Side of Business GmbH

At the time of the book’s publication, the author Kai-Fu Lee was about in his mid-fifties. This is significant because it makes plausible the background of experience on which his insights and theses are based. Lee has lived and worked in China and the USA for decades. He was involved in the development and research of Artificial Intelligence at Google, Microsoft and Apple, among others, for about 30 years. Lee is therefore an absolute authority on his subject. This is also reflected in the invitations to speak at renowned events, which are easily accessible via Youtube.

In the first four chapters of the book, Lee describes the mindset with which Chinese politicians, entrepreneurs, developers and venture capitalists approach the topic of AI and the energy behind it. Again and again, he compares his observations with what he knows from the USA, especially from Silicon Valley. He is convinced that Chinese AI developers and their companies will have outperformed the Americans in the field of AI by 2030 (p. 4). The reasons lie, on the one hand, in the sheer mass of experts growing up in China and, on the other, in the mentality of the Chinese, who trade their data for convenience without much hesitation. For Lee, data is the central resource for the successful development of AI. Those who, like me, only know the Chinese mindset from the media will find Lee’s tour d’horizon through the Chinese corporate world really exciting. Those of us who still believe that China only copies inventions from the West will be impressively proven wrong. As a Western entrepreneur, I would have liked to learn more about the Chinese tax and legal system in order to better assess the conditions for entrepreneurship and innovation and compare them with our economic area.

After these exciting chapters, Lee explains to readers in two chapters the most important technologies associated with AI and how he thinks they will affect the workforce. He is driven by the concern that many people in all parts of the world will no longer be needed because algorithms will do their work. He backs up his thoughts with statistics from the American and Chinese economies. Based on current trends, he predicts that around 2035, about 40-50 per cent of jobs in the US could be replaced by AI technology. Whether this will make economic and business sense is another matter.

Lee divides AI into four development phases. For him, the first two waves are Internet AI and Business AI. In the first phase, all the algorithms invented by the tech giants were created, which have been collecting data on internet users since around the year 2000 and using it to make recommendations for their users. Business AI, for Lee, uses the wealth of data available in companies and leads decision-makers to new insights about their products, processes and market. Business AI makes companies more efficient (p. 111). He calls the third wave Perceptional AI, i.e. the perception of the environment through appropriate devices for images, sound, movement and other sensory phenomena of the real world. Finally, he calls the fourth wave Autonomous AI, which for him includes robots and algorithms that can independently perform tasks and make decisions. Of course, this area of AI presupposes the technical capabilities and the data they generate in the other phases. For Lee, the results of all the development and application areas have now reached the point that it is currently mainly a matter of implementing the technology. Although there will still be surprises and problems when they are put into practice. For Lee their solution is normal engineering work and no longer a stroke of genius. In view of the many dubious results that AI still delivers in many areas, this assessment must come as a surprise. But it testifies to the self-image of the AI scene.

In the last three chapters, Lee paints a picture of how political leaders around the world can deal with the consequences of the AI revolution. Further education of people, higher taxes for the profiteers of the application of AI and unconditional basic income are some of the measures he proposes so that people can coexist with AI in a fruitful way. In such a coexistence, he sees the solution for the future of humanity. Since the market alone will not be able to resolve it, politicians will have to take care of it.

One thesis that runs through Lee’s entire book deserves special emphasis. He observes many founders modelled on the tech giants in Silicon Valley who create purely digital business models, i.e. who stay in the digital world with all their activities. Chinese digital companies, on the other hand, would apply a strategy wherever possible, which he calls Online-to-Offline (O2O) or Online-Moves-Offline (OMO). By this he means that companies want to invest in both digital tools and also have the related analogue resources to have a complete service package under their own control. While Uber “only” manages the drivers and their cars as resources, Chinese companies also own the cars. Delivery services also run the restaurants whose food they deliver. Lee convincingly argues that purely digital business models can be copied with manageable effort. OMO business models, on the other hand, require a bold design, huge investments and thus more perseverance. If such entrepreneurs do well, they achieve monopolies and thus the business models can no longer be copied with any reasonable effort.

Lee’s comparison of the Chinese and American approaches to digitalisation in general and AI in particular leads to helpful insights for managers and entrepreneurs in our cultural area. This is the reason why quite some of Lee’s books have become bestsellers. As a reader with a European background, I would have liked him to comment on the growing danger of cybercrime and cyberconflict as digitalisation progresses, for example, and to outline his assessment of this problem. Attackers have so far always been at least one step ahead of users of digital systems, posing a huge threat to our security and economic well-being. AI will not solve this problem. Quite the opposite.

Another important question is the resource consumption of digital technology. The data centres of the large technology companies are already changing the climate in their locations and the electricity demand is so huge that it will be an important factor in prioritising fields of action in the energy transition. Lee does not address this in his text.

The energy consumption of digital technology also has to do with the amount of data it produces. For Lee, as much data as possible is the key to corporate success because it makes decisions and products better. In my personal opinion, he, like many AI experts, overestimates the importance of data for everyday business. We all prefer to collect more data than less, but business decisions are not necessarily better if we no longer use five key figures but fifty. If Lee has his way, AI will enable us to work with 200 key figures. He proudly demonstrates this development with the example of one of his start-ups, which wants to put people’s credit rating on a whole new data footing. Will this make us better decision-makers in our everyday entrepreneurial lives?

Even if Lee’s book does not answer some important questions – it is a highly interesting and helpful book for entrepreneurs and managers with an interest in AI who want to know how the topic is thought about in other economic areas and what will change their own market.

There are no upcoming events at this time.